Vanessa Michel, OD was raised in Spokane, Washington. She received her Bachelor’s of Science Degree from Eastern Washington University in 1999. She then moved to Chicago, Illinois where she completed her Doctor of Optometry Degree from the Illinois College of Optometry in 2004.

In 2014, Dr. Michel read an article in a professional magazine regarding myopia control and flew to Chicago to attend her first Academy of Orthtokeratology & Myopia Control meeting. “For years, parents had been asking me what could be done to stop their child’s eyesight from getting worse. It was so exciting to now have options. Working with these kids and their families has been one of the most rewarding aspects of my career.”

She is an active member of the American Optometric Association, Optometric Physicians of Washington, American Academy of Orthokeratology & Myopia Control and the International Sports Vision Association.

Outside the office, you will likely find Dr. Michel and her husband cheering for their son and daughter on various sports and activities. She also enjoys traveling, horseback riding, skiing, and walking her dog.

Dr. Eden Weldetnsae is a Seattle native. She received her Bachelor of Science degree in Physiology from the University of Washington. She then went on to earn her Doctor of Optometry degree from Western University of Health Sciences in Southern California. Through her various clinical experiences, Dr. Eden had the opportunity to develop clinical skills in vision therapy, pediatric eye care, ocular disease, low vision, and contact lenses.

She enjoys providing quality patient-centric eye care. With her rich background she can provide comprehensive eye exams in English, Spanish, and Tigrinya. She also loves giving back to the community and has served in several mission trips providing care for communities in need in the states and abroad. In addition, Dr. Eden has a passion for vision therapy and enjoys helping patients gain functional binocular vision, so they can do well in school, work and throughout life.

Dr. Eden is also a member of the American Optometric Association, and the Optometric Physicians of Washington.

When not at the office, Dr. Eden loves spending time with her friends and family. She also enjoys running and the outdoors. 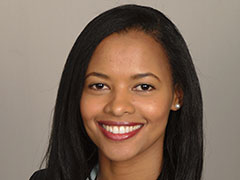 Dr. Anna Chowaniec was born and raised in Sammamish, Washington. She received her Bachelor of Science in Biology with a Chemistry minor from Pepperdine University and graduated with her Doctorate of Optometry from UC Berkeley. She gained clinical experience in various settings including Miami VA Healthcare System and Vandenberg Air Force Base.

After working in private practice in Los Angeles, Dr. Chowaniec is excited to be back in Sammamish serving the community she grew up in. She is passionate about lifestyle medicine, education and public health. She co-manages ophthalmic medical procedures and LASIK, and takes pride in providing her patients with the highest level of care. She loves being able to help her patients with their ocular needs and wellbeing.